Dead and Bury-ed: I think not 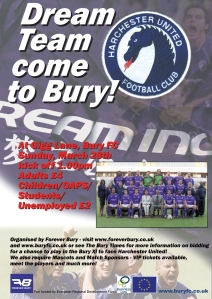 Heart breaking that the hub of a community, Bury FC, can be tossed aside when owners rather than other stakeholders are alleged culprits and responsible for the downfall. Sad day for football. But they will return – better and stronger. #footballfinance

Not the same as my beloved Stockport County, whose fall from the EFL, was its being undermined by financial malaise. But the increasingly common insolvent nature of businesses and unviable commercial ventures illustrate the very reasons why more and more football league clubs are in intensive care.

Sound management practices and financial astuteness are not ubiquitious in professional football clubs. I would even say that there is an epidemic of financial frailties, not only in EFL, and mirrored in non-league, but in other sports from what I have seen recently including rugby league and some NGBs. Of course, there is no need to tar everyone with the same brush. There are some great operations at home in the UK and overseas. Tranmere Rovers’ Mark Palios talks some real sense on the need for EFL and financial practices to reform. Daniel Geey in his thorough book “Done Deal” highlights ailments in ownership and trading models. He also dissects ownership statuses of EPL clubs – and personally that may create another financial disaster as international stakeholders, whatever an enterprise, have a track record of retreat, in the face of adversity or economic downturn.

My Company, assisted Bury FC 15 years earlier. I state hope for the future as the Club has limped from administration to administration whilst pro. A phoenix club whilst painful allows a rethink.

Financial plight is not a new phenomenon to the Shakers, who have had a shakey existence. Working with its supporters’ trust, Forever Bury, we delivered additional income from community initiatives like Dream TV (Sky TV) playing in Town, beer festivals, inter-faith projects, duck races etc (still can’t believe the Wife’s duck named Galatasaray came first across the line across the River Irwell in ‘footy ducks’!) This appointment for ACROBAT FCSM came on the back of our award winning consultancy and role in saving Oldham Athletic in 2004.

The future looks nervous in football – and change is required. At least our businesses are likely to remain in demand as clubs and NGBs seek supplementary or substitute revenue to remain sustainable.