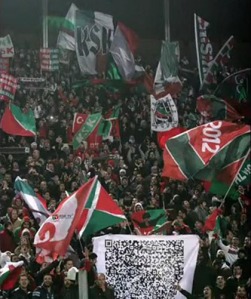 Clever use of technology but not nice!  Have to applaud the innovatory concept of using a QR code to brandish insults at the opposition’s fans though.  This is exactly what happened when Karsiyaka taunted arch rivals Gozteppe.

At the risk of offending, the message was akin to the referee’s parenthood being questioned, with a translation by me, of one set of supporters being the offspring of a prostitute.  Other football blog sites suggest a close alternative interpretation.

I have been involved in the use of QR codes but for sensible, non-inflammatory marketing tactics.

But this has given me an idea?  Which club over here will mimic the use of QR codes first?

How do we stop it exploding into abusive communications – guess every steward needs a smartphone with scanning app!