The S’PORT is going up 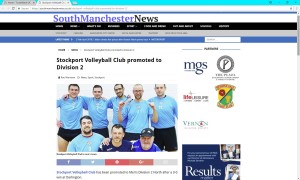 What a week.  In its first ever Season in the elite, National Volleyball League, Stockport Volleyball Club has been promoted after final fixtures against Nottingham and Darlington.  Clinching promotion, away, against Darlington 3-0 was sweet, after losing 2-3 earlier in the Season.

Competing against high-profile clubs this Year including Manchester, Newcastle and York, Stockport’s own Team, nicknamed the S’PORT, clinched promotion alongside Doncaster.  Stockport will play in Division 2 in 2018-19 as a result of this success.  The Season has been truly memorable with the Team also getting to the semi-finals of the National Shield Competition, where the Final was  held this weekend at the National Volleyball Centre in Kettering, and won by London Aces Volleyball Club.

Chairman, Adrian Stores, who set up the Club with Son, Kaya only two years ago, has had even more reasons to stand tall.  Adrian has just been awarded the prestigious accolade of being named ‘Volunteer of the Year’ by Volleyball England, the National Governing Body for the Sport.  It said:

“Here at Volleyball England, we would like to thank you for your outstanding contribution to volleyball. Both we and the independent judging panel have taken great pleasure in reading the high-quality nominations that fellow members of the volleyball community have submitted in your favour. As a category winner, we have invited you to attend the National Cup Finals, hosted at the National Volleyball Centre in Kettering, on Saturday 14th April, where you will be presented with your trophy.

After receiving your award in front of the Cup Finals crowd, you will also be given the opportunity to take part in the presentation for either the Men’s and Women’s Cup or Shield Final.

Once again, congratulations and thank you for your outstanding contribution to volleyball in England.”

Plans are already a foot for the next Season and the next part of Stockport’s journey.  Anyone interested in joining Stockport Volleyball can contact the Club through www.stockportvolleyballclub.com. Promotion naturally brings with it more expenses for sports hall hire, referees’ and scorers’ matchday fees, coaches and training equipment.  For a low investment compared to more established sports, the S’PORT seeks a local or national brand that might want to become main Club sponsor with an array of partner benefits for the next 12 months.  Informal contact from any interested parties to: adrian@stockportvolleyball.com.

From: Uncategorized
← Pesky Ruskies
Sports Education – Top Down →
No comments yet