What if I don’t make it? 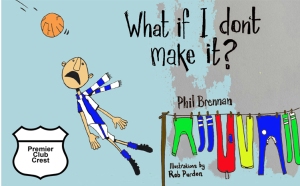 A headline pertinent to the many youngsters that aspire to be pros but fall out of the academies at EPL Clubs (or below) and then seek alternative career destinations.  Well this time it’s a warmer news story, as this post seeks to make our followers aware of a new publication prepared by former Stockport County, Marketing Manager, Phil Brennan.

His first book was a winner and previously highlighted in this Blog.  This second in the portfolio of RoseMartin Publications has a novel appeal around the festive period or towards end-Season, when rewards and praise might be forthcoming.  The end-product is self-published, which we know a little about aka “B&B” and “Get those sheep off the pitch”.  Well, here’s the full story to whet your appetite.  Why not mention to prospective clubs or partners – and help a fellow County fan out in the process?

“RoseMartin Publications was originally set up in 2013 to allow the publication of the biography of Danny Bergara ‘The Man from Uruguay’.  More recently the new children’s book ‘What if I don’t make it?’ has been published. It tells the tale of a little boy who wants to be a footballer but is hindered by his inability to play the beautiful game. The book takes us through his growth as a player via a series of poor ‘coaches’ before finding his perfect teacher.  The book is unique in that it can be tailored to be about a boy or a girl, it can also be tailored to feature any football club, from grassroots through to the top club teams in the World.

Having copyrighted the package (characters, idea and content) RoseMartin intend to contact football clubs at all levels with the hope that the book will be made available to supporters and players from each and every club.  It can be tailored to each club both in colour and to include the club crest, making it both a nice souvenir and teaching implement.”

The publication is the brainchild of Phil Brennan and Rob Purdon who are both FA qualified coaches and who between them have well over 25 years experience of coaching junior football teams. Both became involved in coaching after their respective sons became interested in playing football and soon became aware that their children were not receiving the type of teaching that they would expect.

The two began working together at Stockport County when Rob joined the Club from Blackpool FC and due to their mutual love of coaching became firm friends. Phil had written several football poems regarding his experiences during his years coaching and, having seen some of his artwork, asked Rob if he fancied putting some drawings to the stories.

Their first collaboration is “What if I don’t make it?” and having spoken to several clubs already at junior level, the book has been well accepted within the coaching fraternity, with several orders already received.

Phil and Rob would welcome the opportunity to speak to clubs/coaches on a face to face basis when a sample of the book will be made available along with an explanation as to how it can be tailored to each individual club.  For further information please feel free to contact Phil on bergarabook@outlook.com or philbrennan58@yahoo.co.uk.