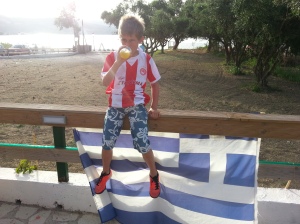 I watched Olympiakos FC’s fans hanging banners and scarves on the main gate at Anfield this Week.  Purely, a photograph opportunity before travelling the M62 to the ‘Theatre of Dreams” (home to Manchester United FC).  It made me wonder if any attention had been given to the fact that both Galatasaray (Turkey) and Olympiakos (Greece) had entered our little Island for European fixtures this same week?

I’m only guessing there must have been some rivalry over the years between these big teams of sometimes opposing Nations.  Certainly, in basketball a recent fixture kicked off – after an angry, reaction by a Brit.

Football rivalry abounds worldwide. In Greece, “Olympiakos v Panathinaikos – As well as the political tension between the two sides, Olympiakos are regarded as a working-class club, and Panathinaikos are billed as eternal enemies with feuds existing across Athens as well as on the pitch”.

Well I’ll need to learn more about any protocol both in Turkey-Greece relations; but also across the City of Athens.  I have just been appointed Global Associate for Panathinaikos FC.  The role particularly applies to Turkey and United Kingdom where I will be responsible for assisting the Club in strategic marketing and especially securing new sponsorship partnerships with significant corporates.  Panathinaikos FC is a Greek Club based in Athens. Founded in 1908, it plays in the Super League Greece and is one of the oldest and most successful teams in Greek football. It has won 20 Greek Championships and 17 Greek Cups and is the best Greek club in terms of achievements in European competitions.