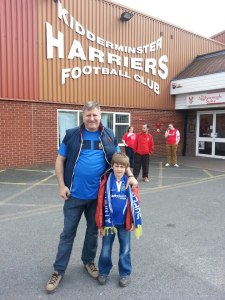 Trying to look for positives, and really it was only my Son’s singing “scarf my father wore” that created a resemblance of a smile.  Both he and I just had to be at Kidderminster – it’s almost part of the ‘religion’. How could we even consider such a thing – that is to miss the fixture?

First half was okay – certainly held our own against a promotion chasing side.  Second half ‘it kicked off in the stands’ and the performance after an enforced delay deteriorated.  So the inevitable happened and as play resumed the County fans realised that we were down.

Prone to my nervous twitch I simply had to ‘Tweet’ throughout the match.  Of course, the rival fans picked up on my proximity and I faced a tirade of abuse.  I do however, repeat the main theme of my communications – that is, that Kidderminster Harriers managed this fixture, with such magnitude, in a manner befitting Disney.

No police until after half time (and after trouble!); fans locked outside; not having made All Ticket designation; supporters of both teams in the same end with virtually no segregation; an alleged crowd in excess of the Stadium’s capacity etc.

So Blue Square North next year.  Regional football in the 6th tier of the English hierarchy.  An imminent announcement was promised from the Club.  It came and somewhat surprisingly was that new Directors would be joining the Board. Both Stockport County stalwarts – one a shareholder (who incidentally I approached to join a prospective Board in the past).  At least one other ‘fan’ was also offered the position, but rebuffed the invitation – at least for now.

Strategically, if a sceptical outsider like me is right, it means an attempt to pacify us the supporters.  More Stockport-people. The real test is if they ‘will have any teeth’.

Going part-time was the second announcement – and one that I had expected first.  Well either that or even going back into administration.

Let’s see how the season tickets sell – as to the groundswell of fans opinions.
For now it’s over and out!