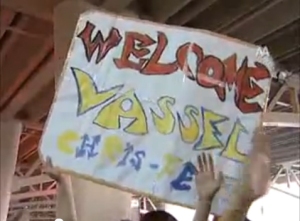 So Kenny Miller couldn’t settle in Turkey and has returned to Cardiff.  Apparently, having only moved there from Rangers in January of this year, he sought a premature return and joined Cardiff City FC.  Personally, I can’t understand that with Bursa, the City that Bursaspor his former team represents, being the founder of Iskender Kebab – one of my favourite dishes.  That alone would have kept me in the City.

On the pitch he had not shown any dissatisfaction, netting five times and helping the Club to finish in third position.

Locations and cultures are subject to personal whims.  Some players turn to Turkey and are amazed by the rapturous reception.  Apparently, Darius Vassell was overwhelmed by 3,000 fans of Ankaragucu turning out to greet him as he flew in to discuss a transfer.  Supposedly he had never expected to sign but was taken aback by the enthusiasm.  See the video. Mind you that situation soon changed as financial turmoil at that same club resulted in his eviction from the hotel that he was staying at.  He had scored twice in eight games in the Super Lig.

Football in Turkey is currently in turmoil – the stability and migration of players to and from will remain an interesting spectacle in the coming months.