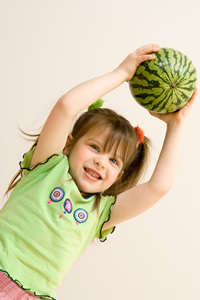 Today launched the start of a ‘healthy eating campaign’ in Tameside using the football clubs of FC United of Manchester (FCUM) and Stalybridge Celtic FC.

I was able to secure the funding towards this initiative from The Community Club Development Fund.  This is a partnership between the Football Conference, the Premier League and the Professional Footballers’ Association.  Both the Premier League and the PFA have committed to contribute £400,000 each to the Fund in this its first year. The Scheme is designed to encourage member clubs develop their work in their local communities.

It was a real joy to witness, Robin Pye – Community and Education Manager and  Karl Marginson – First Team Manager (note the First Team Manager!) educating the Year 4 pupils with such enthusiasm and skill.  As was the purpose, the children learned valuable lessons on healthy eating (it was notable early on  just how well they could recite the Domino’s menu on mentioning the pizza food type!).

Anyone interested to know more can see: www.stalybridgecelticu21.co.uk but from my perspective it was pleasing to see something I got funded being delivered and witness FCUM doing it well as they so often do.